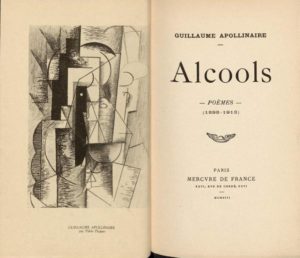 We’re looking forward to Dr. Anne-Sophie Bories’ talk on Friday November 24, at 10:00 at UNED (Room Salón de Grados, Facultad de Educación, Juan del Rosal, 14, Madrid). Dr. Bories was invited by the POSTDATA project, and the title of her talk is:

Sex, Wine and Statelessness. Apollinaire’s verse without borders in “Vendémiaire”

Anne-Sophie Bories is a researcher at the University of Basel. She recently organized the Plotting Poetry/Machiner la poésie international conference, a venue for computational approaches to the analysis of poetry, and for the critical assessment of the contribution of computational tools to the study of poetry. These interests are close to the goals of our project, POSTDATA, and we were fortunate to attend Plotting Poetry earlier this fall.

An abstract for the talk and more information about Dr. Bories’ work are below.

Here’s a [map] for the talk location.

Apollinaire gladly disrupts borders or many kinds. He disregards the boundaries of morality and good taste with his playful pornography and outrageous wit. He oversteps the limits of verse with his Calligrammes. He suppresses the nicely delineating punctuation from his poems. He bridges the prose-poetry gap by cutting up his own prose to create Retour de la maison des morts. He brings together free and strict verse in the same space, circulating between the two with no formal break.

“Vendémiaire” (Alcools, 1913), titled after the French Revolutionary Calendar’s windy month of grape-harvest, is an exemplary specimen of this liberty. It glorifies France and Paris, goes on to call for internationalism, wine and sex, all the way to a “universelle ivrognerie”. The versification follows a similar pattern, intially slipping from strict alexandrines to free verse, then back and forth until the two become closely blended. “Vendémiaire” offer a typical illustration of how Apollinaire rejects geographic limitations, with a somewhat naïve fantasy seeing all rivers of the world collide into one welcoming Paris.

These two lines are soon followed by the notion of “vin pur”, making drunkenness a sacred state, and thirst a form of chastity. The sexual undertone of this “chanson de Paris” adds further texture to the mix, conjuring overlapping images of the city as a large-chested, enticing working-girl eager for oral sex and reckless partying. Such an overpowering, cosmopolitan, hypersexualized feminine figure is an undeniable allusion to his mother, the aristocratic, Polish-Russian, Vatican demimondaine dragging her stateless children across Europe and to Paris.

I shall combine close and distant readings, focussing my analyses on Apollinaire’s versification choices and their importance in the construction of meaning. The skilful oscillation of “Vendémiaire”’s versification, between the very strict and the very lax, just as the tone and contents of the poem blend piety and outrageousness, draws, in fine, an intimate image of the poet in his rootlessness, in his ambivalence towards any culturally or geographically fixed ethos, convention or limitation; for Apollinaire hovers, inevitably, on the border.

Anne-Sophie Bories received her PhD from Paris 3 after being a visiting scholar in UC Berkeley and in University of Leeds. In her thesis, she developed an extensive database about Raymond Queneau’s versification, and used it for hermeneutic purposes. She is in the process of publishing her first book, Des Chiffres et des mètres, looking at Queneau’s versification, and has mostly published articles on this subject. Mostly preoccupied with questions of form, she has received a postdoctoral fellowship from the Swiss National Foundation for Science to work in Basel’s French Department on a project dedicated to free verse. Through the combination of text-mining and direct traditional reading, she is looking for patterns within a large free verse corpus, in collaboration with the ATILF laboratory in Nancy, the CRISCO laboratory in Caen and the DHLab in Basel.